A district court heard that Madam Chan Hoong Choo suffered burns to her face, scalp, trunk, arms and legs in the attack on April 18.


That husband, still pities and side with his mistress after his mistress tied his wife up and pour hot oil over her face?? Which destroyed her WHOLE LIFE?? DOES HE EVEN HAVE A HUMAN HEART?!?! FREAKING USELESS HEARTLESS JERK!

The man should feel very very guilty for all the SHIT he had done to cause ALL THESE and protect his wife even more, shouldn't he?

He should be feeling hatred towards his mistress instead! Afterall, one's a wife and another one is just a mistress. i repeat. JUST, A MISTRESS.


"But another blow came two months later when she discovered that her husband, Mr Soo Kiong Sing had patched things up with his mistress, Goh Gek Hwee."

"Mr Soo and Goh have got back together and he was in court to support her."

Reading these sentences makes me want to dig the man's heart out so badly.
It's like WTF?!
Support the woman who heartlessly disfigured his wife using such a torturing way?
His wife did nothing wrong AT ALL, and was already heart broken that he is having a mistress. YET this shit happened to her.
That jerk is supposed to be the one who deserve ALL THIS SHIT. not his wife.
WHAT A MENTALLY CHALLENGED MISTRESS.
That jerk broke her heart. He hurt her emotionally.
This mistress disfigured her. She hurt her physically.
WTF IS THIS??
SERIOUSLY?

[The Mistress]
Why was she only punished a jail term of 3.5 years and fined $4,500???? WHERE THE HECK IS THE JUSTICE? DOES JUSTICE EVEN EXIST?! That's a FREAKING light punishment! OH BUDDHA. Can u imagine this, your ENTIRE life is ruined, yet ALL that bitch needs to payback for voluntarily causing hurt with dangerous means is ONLY to serve 3.5 years in jail? It's so freaking unfair. I personally think she should spend AT LEAST 20 years in jail. 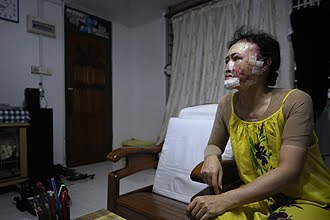 Madam Chan Hoong Choo was hospitalised for more than a month. She suffered burns over 35 per cent of her body and needed several skin grafts. -- ST PHOTO: SAMUEL HE

I pity the wife. Even IF a wife is not being a good wife to handle housework etc, she does not deserve to go through the horror of having hot oil burning the face and being disfigured and to be punished this way for NOTHING.
It's really a tragedy.
i really cant accept, how she could still FORGIVE that jerk.
OH GOD. FORGIVE? 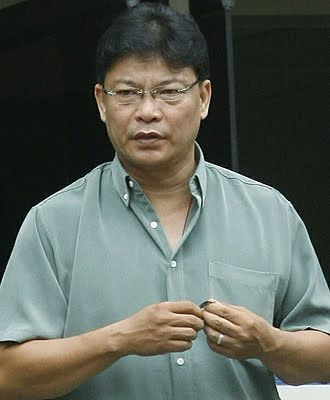 Instead of making up for EVERY SHIT HE CAUSED (although he can never return his wife's look),

he STILL patch things up with his mistress and remained contact with her when she was out on bail while her court case was pending!

He was the one who drove her to court last Tuesday!

That jerk EVEN SAID "if possible, he hopes to remain friends with her."
"Although she did all these things, my heart still goes out to her."
"She's alone here and she wouldn't have had to suffer if she had not met me."

OMFG! WHAT THE....
he's really getting on my nerves.
FRIENDS?! he should have hatred towards her!
and why dont he say "MY WIFE wouldn't have had to suffer if i did not MESS AROUND WITH THAT BITCH"!
WTF la.... til now he could have the heart to say HEARTLESS shit like THIS.
he still THINK AND FEEL FOR HIS MISTRESS instead of his wife.

if it's me (touch wood!) i would have poured ACID all over the mistress AND that jerk husband, then commit suicide. they seriously have yet to know and FEEL the pain of being disfigured by hot oil at all....

now i know why the Death Note was needed.
to regain JUSTICE.