~i was sent from my magical land~

By Rain C. October 29, 2007
had heavy breakfast this morning.
CQYD (sesame flavor) instant noodle. my favourite.
this morning met up jace at amk as usual for the shuttle bus. he was standing there. i approached. n AS USUAL, he see me, no reaction, no greeting. duhx. den was drizzling. i turned and told him itz raining. but he treated me like... I'M INVISIBLE. 1stly, he listening to his mp3. 2ndly, he alwaez show his act cool face. so dao~ see liao oso dulan nor. these 2 causes communication barriers. wat to do? so i went under the shelter myself. later vik came. asked y i stand here & he stand there. he was like dunno. den smile smile. (his face changed immediately when he sees others). fcuk. only vik visible to him huh. nvm. im used to it. den later in bus. normally he would sit wit me de. but today. going to skool & going back after back, he sit alone opposite me. hell~ watz going on. know wat? this reminds me of ROY. U, are like him. happy happy sit tog. not happy sit somewhere else. fcuk. i stink huh?! say la. kaO~ exactly SAME as roy. PURPOSELY wanna make me feel lonely rite. whatever.
morning lecture.
ricky was chatting about his times working in Genting, etc.
and about Cost of living. Standard of living. in Cambodia.
the mines which were all over cambodia.
the mastermind? "Pol Pot"
i became sooo curious about all these. and kept asking. bout da history etc.

these are what i found out over my lil' research. 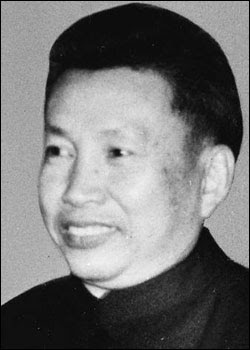 On the night of April 15, 1998 the Voice of America, of which Pol Pot was a devoted listener, announced that the Khmer Rouge had agreed to turn him over to an international tribunal. According to his wife, he died in his bed later in the night while waiting to be moved to another location. Ta Mok claimed that his death was due to heart failure. Despite government requests to inspect the body, it was cremated a few days later at Anlong Veng in the Khmer Rouge zone, raising suspicions that he committed suicide. 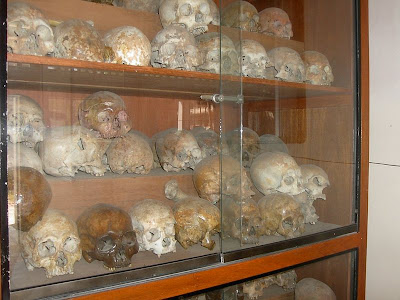 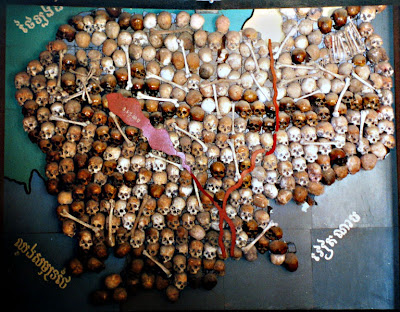 Mine Clearance
Cambodia reports that 34,713,984 square meters of land were cleared in 2002, including 41,030 antipersonnel mines, 903 antivehicle mines, and 80,362 UXO. This compares to about 21.9 million square meters cleared in 2001. The total land cleared from 1992 to 2002 was more than 207 million square meters. The known numbers of antipersonnel mines found and destroyed in Cambodia by mine clearance authorities in this period was 355,258. However an unknown number of antipersonnel mines exploded in incidents or were cleared by village deminers. Official clearance agencies in Cambodia are CMAC, MAG, HALO Trust, and the Royal Cambodian Armed Forces (RCAF). 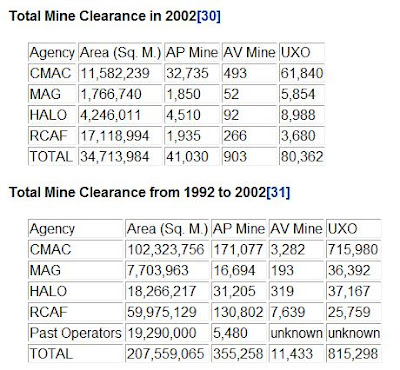 hmphx. fell asleep after finish listening to this interesting history from Ricky.

lecture til about 4pm.
practise a lil' bit.
roy's been trying to be nice to jace. like today. my ajfc grp were at the baccarat tables. den roy came over asking jace to go over roulette, got space for him. whoa. only ask him la. we invisible ar. duhx. whatever. jace n him 'arh ga liao' aniway. cant be bothered.
left skool at 5+pm.
laoda they all go gai gai. watch movie.
too bad i underage. =(
wat to do. being da youngest in the group of elderly.
nvm. look on the bright side of life. =]
felt da loneliness todae. laoda they all go gai gai without me. i so wanna hang out wit them but... itz juz me myself. siwei did TRIED to console me by saying 'ok la ok la we watch other movie lo'. but. no reactions from others. means wat? u guyz still wanna stick to ya OWN plan ma. if u r sincere to change or wan me to go, obviously will automatically change ya plan. so wat for kept say wanna change but nothing was done. say for 'song' huh. i know ya juz trying to console. aniwae. itz ya own lives. own rights. own decisions. i dun wan me go den change plan den u guyz unhappy. juz like i said. i dun wanna SPOIL ya plans. and jace... been hanging out with roy they all. heard he went ktv with them. tho he did jio me. but. sincerity? that day i thot da plan was 'off' le. thatz y i went to find mummy. but in e end u guyz going. oso neva call me n ask if i wanna join. but frankly. roy, only wanna get cose to u jace. not me. and i do feel awkward. if siwei & laoda got go, itz a different thing. hm. den jace. in da bus oso wanna leave me alone. haiz. whatever. i am MISSY LONELY. ~Lonely im so lonely, i have nobody, to call my owwnnn... im so lonely, im missy Lonely, i have nobody, to call my owwnnn~
met up jiejie at northpoint. for dinner.
KFC. long time no eat le. 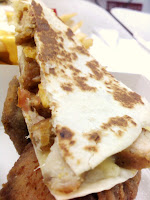 and a 2pc Chicken meal for me. 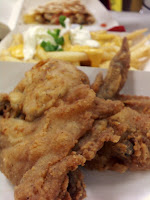 tomoro wanna stay back after skool to practise for wednesday's assessment o.