~Distance is nothing when two people are loving~

By Rain C. August 04, 2008
a surprised call from somebody this afternoon.
when i answered the call, he said "hello. itz me~"
I THOUGHT WAS MY HONEY LO~
but on second thought, how could that be?! Singapore hp number leh!
so i kept asking ''u who? who? who?"
den he was like "shut up lah who who who"
[confirm not my honey liao. honey wont say 'shut up' lol].
den from his english accent i thought he's a malay.
den in the end, KNS! si meow meow. lol. I THOUGHT WHO. lol

today met up xiaoxin @ city hall. went to Funan IT Mall.
[i expected kailin to join us but in the end she told me she cant make it o]

he brought me to find the pink lugagge. but dun have.
he den went to cut hair.
while i wondered around. bought a mini memo cockboard.

after he was done. he decided to pay his ex-colleagues a visit. upstairs.
one of them is 'half-thai'.
den this xiaoxin introduced me to him saying that im 'half-thai' too.
this guy didnt believe his words n so he asked me in thai "คนไทยครับ? (u're thai?)"
i shook my head. lol~!
kns xiaoxin. make me paiseh.

we wanted to had Ajisen for lunch but, xiaoxin so unlucky la.
Ajisen @ Funan closed down. lol.

den we headed down to Queensway Shopping Centre by bus.
as i said to bring him there to fix his racket.
[jialat o. normally i go out with my friends, they lead the way. coz im a road-idiot. but today bring a malaysian fren out. so i must lead the way. he even suggested walking to QUEENSWAY from CITY HALL. can u imagine? T_T]

while waiting for his racket (fixing in progress),
we went opposite and dine-in at.... 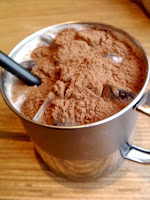 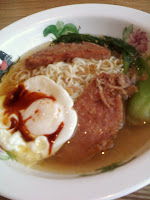 he ordered these extras to 'niap niap'. 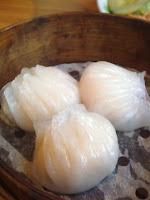 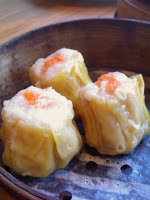 were sooo full o.....
xiaoxin footed the bill. thanks dude!

we den went to IKEA and window shopped.
7pm. we went back to Queensway Shopping Centre to collect his racket.
i went around asking for the ''jersey customization'' prices.
S$18-25 (estimated price).

before we headed home.

tomoro gonna go shopping with mummy!
itz been soo long since i last shopped with her o.
Shiseido shopping spree~!